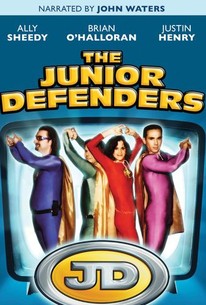 Twenty-five years after the cult-television hit "The Junior Defenders" was abruptly cancelled, the washed-up former child stars who played adolescent superheroes in the series are kidnapped by an obsessive fan and forced at gunpoint to act in a brand new episode. Back in 1978, "The Junior Defenders" beat out such small screen hits as Happy Days and All In the Family in the ratings to become a nationwide phenomenon. Then, seemingly out of the blue, ABS suddenly cancelled the series. The fans, a young Norman Nields included, were devastated. Twenty-five years later, Norman (Fred Hazelton) continues to fume about the cancellation - until one day when he hatches a crazed plan to get "The Junior Defenders" back on the air. After stealing a Winnebago, Norman sets set out on the freeway in a cross-country race to collect the four stars of the series and hijack a Hollywood soundstage in order to shoot a brand new episode of "The Junior Defenders" that he hopes will prove effective in launching a revival of the series. As the media catches wind of the scheme, the former child stars are thrilled to learn that they have achieved folk-hero status among fans who can't wait to see the spandex-clad crime-fighters back in action. Ally Sheedy, Brian O'Halloran, Justin Henry, and Jason David Frank star in a wild story of obsessive fandom featuring special appearances by Kevin Smith, Pauly Shore, and Bill Raymond, and narration by independent film legend John Waters.

Pauly Shore
as Himself

Florence Henderson
as Herself

Peter Tork
as Himself

Michael Dukakis
as Himself

Kevin Smith
as Himself

John Waters
as Narrator
View All

Critic Reviews for The Junior Defenders

There are no critic reviews yet for The Junior Defenders. Keep checking Rotten Tomatoes for updates!

Audience Reviews for The Junior Defenders