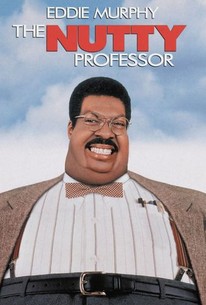 The Nutty Professor falls back on juvenile humor eagerly and often, but Eddie Murphy's consistently funny work in dual roles means more for audiences to love.

Comedian/actor Eddy Murphy makes a comeback in this at times hilarious remake of the 1963 Jerry Lewis classic. Whereas Lewis' professor was a scrawny nerd who wanted to be suave, well-muscled and cool, Murphy's Professor Sherman Klump is morbidly obese and shy. He dreams of being a thin, buffed ladies' man. Klump works in a university lab researching a new fat-burning formula. When lovely Carla Purty shows up as his new lab assistant, he falls head-over-heels and decides to accelerate the experiments and take a massive dose of the drug himself. Sure enough it works and what was once ponderously rotund Klump instantly becomes Buddy Love, Mr. Cool incarnate. Unfortunately, the drug's side-effect produces an enormous testosterone rush and Love soon proves to pugnacious, obnoxious and sexually insatiable. The drug also wears off at inopportune times so that Klump must take it constantly. It is as Buddy Love that he makes his play for Carla, but is that really what she wants, or is Carla a much deeper well? The movie's unquestionable highlight is the Klump family dinner scene in which Murphy plays all five enormous, people ranging from a hypersexual grandma to his dangerously gaseous father.

Roy Werner
as Guy in Crowd

Retha Jones
as Woman in Crowd

News & Interviews for The Nutty Professor

Critic Reviews for The Nutty Professor

Audience Reviews for The Nutty Professor