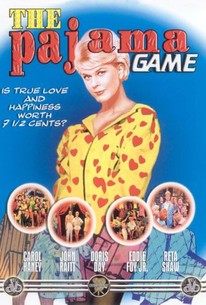 The Broadway musical Pajama Game was based on Seven and a Half Cents. a comic novel about labor relations written by Richard Bissell. Doris Day stars as an employee at a pajama factory who becomes the spokesperson for her fellow workers when management refuses to give them a 7 1/2 cent raise. Complicating matters is the fact that Management is represented by handsome John Raitt, who happens to be in love with Day. A subplot involves Day's freewheeling co-worker Carol Haney and her insanely jealous boyfriend, factory-manager Eddie Foy Jr. Many of the cast members from the original Broadway production (Raitt, Haney, Foy, Reta Shaw, Peter Gennaro etc.) are retained for the film version, as are most of the Richard Adler/Jerry Ross songs: highlights include "Hey There", "Steam Heat", "Hernando's Hideaway", "There Once Was a Man". and the title song. The choreography is in the capable hands (and feet) of Bob Fosse. Pajama Game performed so well at the box-office that Warners immediately went to work on the filmization of the second (and last) Adler/Ross Broadway collaboration, Damn Yankees.

William A. Forester
as Joe

Fred Villani
as Tony the Headwaiter

Critic Reviews for The Pajama Game

Audience Reviews for The Pajama Game