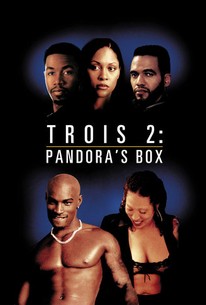 A woman's infidelity leads her into a web of larceny and danger in this noir-flavored independent thriller. Mia DuBois (Monica Calhoun) is a psychologist who until recently worked with the police department, counseling the survivors of victims of violent crime. While Mia has entered into a successful private practice, she's persuaded by her former colleagues to take on new client, Tammy (Chrystale Wilson), who is still dealing with the recent murder of her husband. As Mia helps Tammy with her problems, Mia finds herself thinking about her own marriage to Victor (Kristoff St. John), which has hardly been happy lately. As Mia begins wondering if she has other options, she visits a mysterious nightclub, Pandora's Box, where she meets the sexy and mysterious Hampton (Michael Jai White). Mia soon begins having an affair with Hampton, unaware that Hampton is actually working with Victor and Tammy; Mia is soon to inherit $20 million, and Victor is determined to get his hands on the money. Hampton soon shifts his alliances to stay with Mia, but Victor and Tammy are not giving up their shares of the fortune quite so easily. Pandora's Box also features former teen heartthrob Joey Lawrence in a supporting role.

Marvin Dixon
as Man in Club

Jennifer Cosper
as Forensic
View All

There are no featured audience reviews for Trois 2: Pandora's Box at this time.