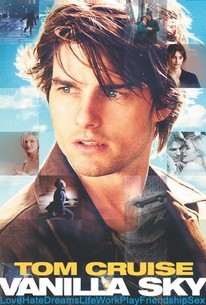 An ambitious mix of genres, Vanilla Sky collapses into an incoherent jumble. Cruise's performance lacks depth, and it's hard to feel sympathy for his narcissistic character.

A remake of the Spanish film Open Your Eyes (1997), this thriller from director Cameron Crowe bears one of several discarded titles for his previous, Oscar-winning film Almost Famous (2000). Tom Cruise stars as David Ames, a womanizing playboy who finds romantic redemption when he falls in love with his best friend's girlfriend Sofia (Penelope Cruz, reprising her role from the original film). Before that relationship can begin, however, David is coaxed into a car driven by an ex-lover, Julie (Cameron Diaz), who turns out to be suicidal. Driving her car off a bridge, Julie kills herself and horribly disfigures David. Reconstructive surgery and the loving support of Sofia seem to reverse David's luck, but eerie incidents are soon making him question the reality of his existence and his control over his life, even while he is suspected of complicity in Julie's death. Vanilla Sky (2001) bears the expected Crowe trademark of an obsession with recent pop culture and particularly rock music, a more important element of the remake than the original film. That project's writer/director, Alejandro Amenabar, crafted his own supernatural hit the same year with The Others (2001), starring Nicole Kidman, the soon-to-be-ex-wife of Cruise. ~ Karl Williams, Rovi

Cameron Watson
as Other Doctor

Ray Proscia
as Doctor from Berlin

Conan O'Brien
as Himself

Jane Pratt
as Herself

Patrick McMullen
as Himself

Steven Colvin
as Himself

Cindy Crowe
as Herself

John Sypolt
as Himself

Laura Fraser
as The Future
View All