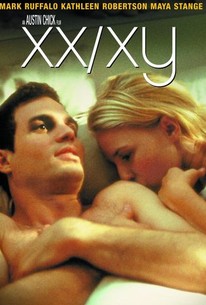 The characters are both unsympathetic and uninteresting.

A man finds himself having to decide between one of two women -- not once, but twice -- in this independent drama. In 1993, Coles (Mark Ruffalo) is a film student at Sarah Lawrence where he meets two fellow undergrads, Thea (Kathleen Robertson) and Sam (Maya Stange). Coles and Sam come together and Thea fades out of the picture. In time, Sam tires of Coles' aimlessly hedonistic attitude, and they break up. Ten years later, Coles, after a failed career in feature films, is doing animation for an advertising agency and living with his girlfriend, Claire (Petra Wright); Thea helps run a successful restaurant with her husband, Miles (David Thornton); and Sam, smarting from a bad breakup, returns to New York after several years in London. Coles runs into Sam and discovers he still has strong feelings for her, but has to decide if they're strong enough to break off his relationship with Claire. XX/XY was the first feature film from writer/director Austin Chick.

Evan Neumann
as Guy Who Asks for His $ Back

John A. MacKay
as Mitchell

Paula A. Roth
as Mom

Jeff Ward
as Stunt Cop No.1

Keith Siglinger
as Stunt Cop No.2

Evan Neuman
as Guy Who Asks for his Money Back

T.J. Kenneally
as Executive No.1

Sam Zuckerman
as Executive No.2