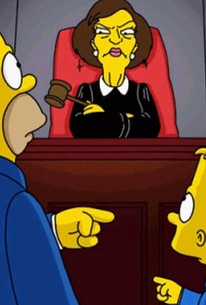 The Parent Rap
The Simpsons Season 13

One morning, Homer Simpson (voice of Dan Castellaneta) decides he doesn't feel like giving his son Bart (voice of Nancy Cartwright) and his best friend Milhouse (voice of Pamela Hayden) a ride to school, which turns out to be a bad choice, since Bart ends up stealing a police car on his way to Springfield Elementary. Bart and his folks end up in front of the usually lenient Judge Snyder (voice of Harry Shearer), but at the last minute the judge goes on vacation, with the stern Judge Constance Harm (voice of Jane Kaczmarek) taking his place. Harm decides Homer and Marge (voice of Julie Kavner) have done a bad job of raising Bart, and orders the boy to be tethered to Homer at all times. This soon proves wildly impractical and Marge decides it isn't helping, so she cuts the cable. This angers Judge Harm, who responds by putting Homer and Marge in public stocks; they eventually escape, and Homer plots revenge against the judge, which typically goes awry. "The Parent Rap" first aired on November 11, 2001. 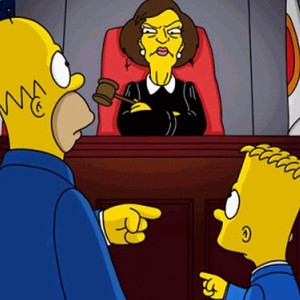