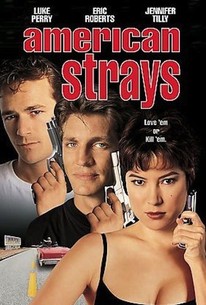 A collection of losers, misfits, and outcasts find their lives unexpectedly converging at a diner along a desert highway in this violent and offbeat comedy drama. Dwayne (John Savage) is a strait-laced-looking vacuum cleaner salesman with a bad habit of murdering prospective customers, while Patty Mae (Jennifer Tilly) is a sexy mystery woman who has amassed an impressive collection of carpet sweepers. Martin (Eric Roberts) is a down-on-his-luck family man wondering how he'll support his wife and kids now that he has lost his job. Johnny (Luke Perry) is a deeply depressed young man who has arranged for a hired killer (Sam J. Jones) to murder him, not knowing that the killer has no intentions of allowing him to die quickly or easily. And Harv (James Russo) and Gene (Joe Viterelli) are a pair of mobsters from Las Vegas who discuss their various problems with women, not very concerned about the fact there's a man locked in the trunk of their car. American Strays also features Carol Kane, Brion James, and Melora Walters.

Patrick Warburton
as Cop No. 1

Mike Kaliski
as Cop No. 2

Leland Crooke
as Cop No. 3
View All

There are no critic reviews yet for American Strays. Keep checking Rotten Tomatoes for updates!

There are no featured audience reviews for American Strays at this time.