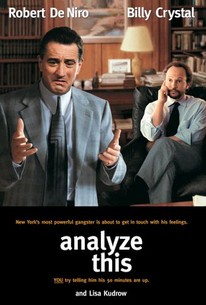 Analyze This is a satisfying comedy with great performances by De Niro and Crystal.

Paul Vitti is one of New York's most powerful gangsters. He's grown up in the Mob life and has been well prepared for his future responsibilities by Manetta, his mentor and surrogate father (since his own father was gunned down years before). But when it becomes time for Paul Vitti to assume his role as the leader of his crime family, he suddenly starts having trouble breathing. He can't sleep; he's distant and preoccupied around his wife and kids; his mistress wants to know why his interest in romance has flagged; and his loyal henchmen wonder at his suddenly anxious demeanor. If the other crime families find out that Paul Vitti is having panic attacks, then how can he run his business? He's supposed to inspire panic, not experience it. Ben Sobol is a divorced suburban New York psychiatrist with a young son and a fiancee he's about to marry. He's a nice guy and a loving dad who's plagued by his relationship with his own father, a highly successful, media-seeking, pretentious Upper East Side therapist. Ben doesn't want to be anything like either of his self-absorbed parents - even if shunning the spotlight means enduring a patient list full of dull, boringly neurotic complainers without a serious challenge among them.

News & Interviews for Analyze This

Critic Reviews for Analyze This

Audience Reviews for Analyze This