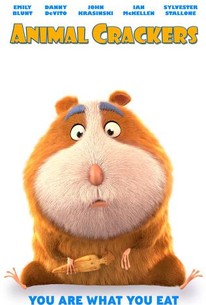 Owen Huntington's life is one continuous loop of work, eat, and sleep. A loop that keeps him from ever seeing his wife Zoe, or his three year old daughter MacKenzie. A loop that is sure to kill him. Then, one day, Owen discovers a long lost Uncle passed away -- and left his Circus to Owen. What could have been a blessing -- soon unfolds into a curse. The circus is broke. The animals are all gone. And most of the crew are too old to be of any use. It's a disaster. But something magical happens. Owen discovers Buffalo Bob's secret. A box of Animal Crackers that gives the bearer the ability to become any animal in the box. Suddenly, there's hope. If Owen can use the box to become these animals and perform people will come. He'll be rich. But Owen forgot one thing. Buffalo Bob had a brother. Horatio P. Huntington. Owner of the largest chain of circuses in the world. And Horatio would stop at nothing to get his hands on the Magical Animal Crackers.

Kevin Grevioux
as Samson The Strongman
View All

There are no featured audience reviews for Animal Crackers at this time.