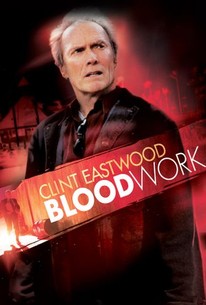 Blood Work is a routine, but competently made thriller marred by lethargic pacing.

A retired detective must battle former colleagues and his own failing health in order to bring a murderer to justice in this action drama produced and directed by its star, Clint Eastwood. Terry McCaleb (Eastwood) was one of the best and most thorough detectives at the FBI's Southern California office, until a massive heart attack sidelined him from police work for good. Following a heart transplant which saved his life, McCaleb has resigned himself to living quietly on a houseboat for the rest of his days, observing a strict health regimen prescribed by his cardiologist, Dr. Bonnie Fox (Anjelica Huston). However, McCaleb is persuaded to take on one last case through the insistence of a woman named Graciela Rivers (Wanda De Jesus). Rivers's sister was murdered in cold blood by a mugger, and her heart was used for McCaleb's transplant; now, Rivers wants McCaleb to find her sister's killer. McCaleb agrees to take on the case, but he quickly discovers his weakened physical condition makes the rigors of handling an investigation far harder and more difficult than its ever been before; he also can no longer drive a car, and must persuade his oddball friend from the marina,Buddy Noone (Jeff Daniels), to ferry him around town. Before long, despite these drawbacks, McCaleb discovers evidence which suggests the murderer may be a serial who uses random street robberies as a cover, but he finds that Ronaldo Arrango (Paul Rodriguez) and John Waller (Dylan Walsh), the police detectives assigned to the case, are not especially interested in sharing the glory (or their legwork) with the former FBI point man. Blood Work was adapted from the novel by Michael Connelly; Brian Helgeland wrote the screenplay. ~ Mark Deming, Rovi

Jeff Daniels
as Buddy Noone