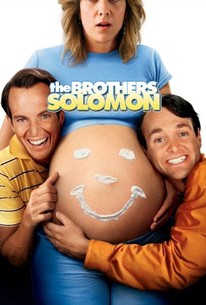 Squandering its impressive cast with poorly-directed gags, The Brothers Solomon is a one-joke film stretched well beyond its limits.

Mr. Show alumnus Bob Odenkirk directed -- and SNL vet Will Forte scripted -- this gleefully raunchy tale of two socially backward but kind-hearted adult brothers, Dean and John Solomon (Forte and Will Arnett), who had the misfortune to be home-schooled by their father at a remote Arctic outpost. Destined to be perpetually single, their moronic, klutzy attempts at meeting new women (such as popping the question on a first date in a crowded restaurant) always blow up in their face. Then, one day, the Solomons receive the distressing news that their father is on his deathbed -- and to complicate matters, he indicates that his dying wish involves having a grandchild. John and Dean are happy to oblige -- but where in the world will they find a mother for this infant? Suddenly, the bachelors' romantic desperation doubles, and each brother embarks on a nutty, madcap quest to find the girl of his dreams and the mother of his future children. Malin Akerman, Kristen Wiig, Jenna Fischer, and Chi McBride co-star.

Will Arnett
as John Solomon

Will Forte
as Dean Solomon

Michael Naughton
as Husband No. 1

Steven Pierce
as Husband No. 2

News & Interviews for The Brothers Solomon

Critic Reviews for The Brothers Solomon

Audience Reviews for The Brothers Solomon