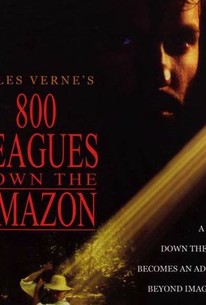 800 Leagues Down the Amazon

800 Leagues Down the Amazon Photos

In this jungle adventure, based on a Jules Verne novel, Spunky Minha, was born and raised in the Amazon jungle on her father's hemp plantation. After she agrees to marry Dr. Manuel Valdez, they decide to hold the wedding in Brazil so his sickly mother can be there. Unfortunately, the girl's father hestitates to make the long, dangerous journey downstream because years before he was convicted for a crime and was sentenced to die. Though innocent, he does not want to face Brazilian justice and so changed his name and created his own jungle world on the plantation. Despite all this, he decides he will be there at the wedding. They set off on a great raft and during the journey face many dangers including deadly natives, snakes, piranhas, gators, fierce storms and a greedy bounty hunter who wants to blackmail Juan. The extortionist knows that Juan is innocent and carries with him proof, but this does not stop him from demanding that Juan pay him a fortune and hand over his lovely daughter. When Juan refuses, the bounty hunter makes good his threat, leaving his daughter and the doctor to somehow prove her father's innocence.

E.E. Bell
as Fragoso
View All

Critic Reviews for 800 Leagues Down the Amazon

There are no critic reviews yet for 800 Leagues Down the Amazon. Keep checking Rotten Tomatoes for updates!

Audience Reviews for 800 Leagues Down the Amazon

There are no featured audience reviews for 800 Leagues Down the Amazon at this time.

800 Leagues Down the Amazon Quotes