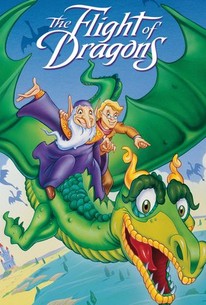 The Flight of Dragons

The Flight of Dragons Photos

This animated fantasy film, from the creators of The Last Unicorn, unfolds in an age when magic and science coexist uneasily, and humans still walk the earth alongside wizards, unicorns, and dragons. One of the four most powerful mages on the planet, Carolinus the Green Wizard (voice of Harry Morgan) realizes that magic's power is slipping in favor of the logic of science -- a potential detriment to men, who need such magic to provide regular inspiration for themselves. Carolinus thus summons his three brothers for an emergency tête-à-tête, and suggests that they create a separate magical realm for themselves, via which they can send man the magic he needs on a regular basis. Two of the brothers agree, but the third -- the evil wizard Ommadon -- not only refuses to be shuttled off to this removed existence but vows to wage full-scale war on humankind with evil feelings and ideas. Because the rules of the universe forbid Carolinus and his other two siblings from going head-to-head with Ommadon, they must seek out a human hero with the power to stop him. Carolinus sends this request to the Fates. They, in turn, select Peter (voiced by John Ritter), who is, of all things, a man of science.

News & Interviews for The Flight of Dragons

Total Recall: The Golden Compass and Kids in Fantasyland
View All

Critic Reviews for The Flight of Dragons

Audience Reviews for The Flight of Dragons

The Flight of Dragons Quotes