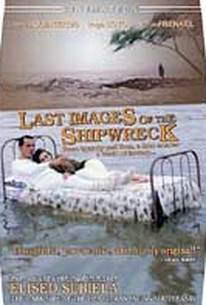 Last Images of the Shipwreck

The director of the enigmatic, entirely memorable feature Man Facing Southeast confronts viewers with another exhuberantly metaphysical movie in Ultimas Imagenes del Naufragio. In the story, Roberto (Lorenzo Quinteras) is a man whose inner life has gone dead. He has no interest in his job (selling life insurance) or his family. About the only thing that interests him is his writing, but he currently has writer's block. When he sees a lovely young woman on the verge of throwing herself in front of a train, he can't help himself: he has to stop her. It turns out that the woman, Estela (Noemi Frenkel), is only slightly addled: she is a prostitute who uses this rather dramatic technique to pick up men. Interested in her as a character for his novel, he accompanies her home. At one point, the ghosts of her dead relatives get on the bus they are traveling on, but she refuses to speak to them so as to avoid having to speak about her father. Once Roberto gets to her home, he finds it to be a hot-bed of odd characters. Attracted by them to participate in life once more, even if that life is very peculiar, he visits them more and more frequently, and is fired from his job and abandons his wife. Estela has a very personal relationship with Jesus, and seeks his advice on how to get Roberto to notice her as a woman. ~ Clarke Fountain, Rovi

Critic Reviews for Last Images of the Shipwreck

Audience Reviews for Last Images of the Shipwreck

There are no featured audience reviews for Last Images of the Shipwreck at this time.

Last Images of the Shipwreck Quotes