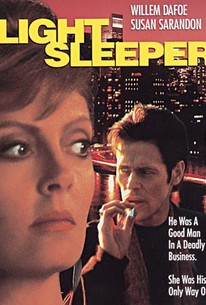 Paul Schrader's brilliant study of another alienated urban denizen skirting the borderline of madness stars Willem Dafoe as John Le Tour, a rich, upscale drug dealer for Manhattan professionals -- "White drugs for white people," as he puts it. John is a recovering addict and for him it's the perfect job, as he can relate completely with the self-absorbed eccentrics he services. But when his boss Ann (Susan Sarandon) tells John that she is planning to abandon the drug business for herbal cosmetics, John's life is thrown into disarray. With no future plans, he sees black clouds heading his way. Coincidentally, he runs into Marianne (Dana Delany), an old girlfriend and former addict who has returned to New York to be with her dying mother. John sees Marianne as his redemption and starts to pursue her, but she doesn't want to be reminded of her past. When the murder of an Upper West Side woman involved in a drug transaction has the police scouring the town for suspects, John thinks they are following him, and the strain upon his life and his hopes for the future become harder and harder to bear.

Jennifer Fowler
as Woman at Bar

Gabrielle Stubbert
as Woman at Bar

Arcoiris Medina
as Woman at Laundromat