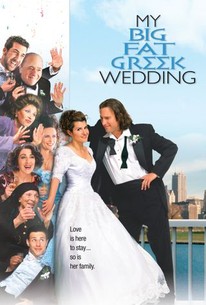 Though it sometimes feels like a television sitcom, My Big Fat Greek Wedding is good-hearted, lovable, and delightfully eccentric, with a sharp script and lead performance from Nia Vardalos.

One woman's rocky road to the altar gets played for laughs in this comedy, adapted from the one-woman off-Broadway show written by and starring Nia Vardalos. Toula (Vardalos) is a Greek-American woman who is in her early thirties and single, with no immediate prospects of changing that status any time soon. This bothers Toula a bit, but not half as much as it distresses her mother (Lainie Kazan) and father (Michael Constantine), who want to send her to Greece in hopes of finding a husband in the old country. Toula isn't interested in leaving the country to find a man, but since she works in the family business -- a Greek restaurant in Chicago called Dancing Zorba's -- she has to hear about it whether she likes it or not. One day, after seeing a handsome stranger in the restaurant and not having the courage to talk to him, Toula decides she needs a bit of self-improvement. Despite her dad's misgivings, Toula signs up for a night-school class studying computers, trades in her glasses for contact lenses, gets a different job at a travel agency, and spruces herself up with a new look and a new attitude. To her very pleasant surprise, she once again encounters the handsome stranger, who soon asks her out on a date. Schoolteacher Ian Miller (John Corbett) is seemingly perfect -- he's tall, handsome, smart, good-natured, and soon in love with Toula -- except for two little things: he's not Greek, and he's a vegetarian, both of which horrify Toula's family. When Ian pops the question (and Toula says yes), the bride-to-be has to negotiate a reasonably peaceful meeting between Ian's upper-class parents and her own working-class extended family. There's also the matter of the wedding, which Toula's mother is planning around the notion that quantity IS quality. My Big Fat Greek Wedding also features Ian Gomez (Vardalos' real-life husband), Louis Mandylor, Andrea Martin, and Joey Fatone (from the pop group *NSYNC). Tom Hanks and Rita Wilson helped produce the film through the auspices of their production company, Playtone. ~ Mark Deming, Rovi

Christina Eleusiniotis
as Toula at 6

Marita Zouravlioff
as Toula at 12

Sarah Osman
as Athena at 15