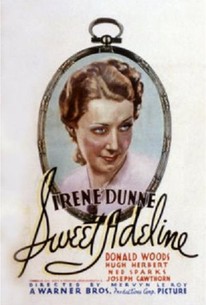 The 1929 Jerome Kern-Oscar Hammerstein Broadway musical Sweet Adeline has generally been credited as the vanguard for the "Gay 90s" nostalgia fad of the early 1930s. By the time the film was adapted to the screen in 1935, that fad had pretty much played itself out, making the property seem more old-fashioned than ever. Irene Dunne takes over from Broadway's Helen Morgan as beer-hall entertainer Adeline Schmidt, whose romance with songwriter Sid Barnett (Donald Woods) undergoes an inordinate number of setbacks in the course of the film's 85 minutes. Much of the play's libretto has been scrapped in favor of an espionage angle, as Adeline tries to avoid assassination at the hands of a Spanish spy named Elysia (Wini Shaw). Contemporary critics carped that Irene Dunne was unable to match Helen Morgan's delivery of such torch songs as "Why Was I Born"; this is true enough, but Warner Bros. deserves credit for endeavoring to cast Dunne against type.

Harry Tyler
as Louise
View All

There are no critic reviews yet for Sweet Adeline. Keep checking Rotten Tomatoes for updates!

There are no featured audience reviews for Sweet Adeline at this time.