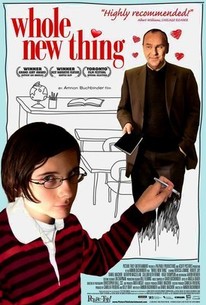 The tender little moments of adolescence are beautifully captured in this warm and modest coming-of-age drama.

A precocious teenage genius is suddenly forced to adapt to the real world, while the real world around him is having some growing pains of its own in this independent comedy drama from Canada. Emerson Thorsen (Aaron Webber) is an exceptionally talented and intelligent 13-year-old who has been raised and educated by his free-thinking parents ,Rog (Robert Joy) and Kaya (Rebecca Jenkins). While Emerson is clever, witty, and has recently written his first novel, he doesn't seem to have very good socialization skills when he spends time with others, and as he enters adolescence, Rog and Kaya decide to enroll him in public school so he can learn how to function with others (as well as patching up some gaps in his education). While most of Emerson's teachers are happy to have him in class, his ambiguous sexuality and tart intellectualism make him an immediate target for bullies in his small Nova Scotia town. Emerson's English teacher, Don Grant (Daniel MacIvor), has a bigger problem than most with his new student -- Emerson becomes quite infatuated with Don, and isn't at all shy about expressing his attraction, while the closeted Don is torn between a desire to return his advances and the knowledge that he'd be throwing away his career in education if he even acknowledged them. Whole New Thing received its world premier at the 2004 Toronto Film Festival.