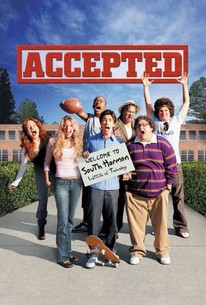 Like its characters who aren't able to meet their potential, Accepted's inconsistent and ridiculous plot gets annoying, despite a few laughs.

1:40
Accepted: Official Clip - What Do You Want to Learn?

1:09
Accepted: Official Clip - Ask Me About My Wiener

Misfit teenagers who can't get into college instead create one of their own in this youth-oriented comedy. Bartleby Gaines (Justin Long) is a high school senior who's a nice guy and reasonably bright. However, his academic history is none too impressive, and as graduation comes and goes he's yet to find a college willing to admit him. Bartleby's parents are unhappy about this turn of events, and when he's turned down by his final "safety" school, Bartleby hatches a desperate scheme -- using his computer, he creates a website and letterhead for a non-existent college, South Harmon Institute of Technology, and tells his parents he'll he matriculating there come September. As it happens, several of Bartleby's friends -- Glen (Adam Herschman), Rory (Maria Thayer), Hands (Columbus Short), and Schrader (Jonah Hill) -- are in the same predicament, and soon they're also part of the new class at South Harmon. Word spreads like wildfire about South Harmon via the internet, and soon hundreds of prospective students are lined up waiting to sign up for its nonexistent classes. Bartleby and his pals commandeer a condemned mental hospital to serve as their campus, persuade Bartleby's mildly deranged Uncle Ben (Lewis Black) to serve as their dean, and soon they're running what looks like a genuine alternative educational facility, at least from a distance. But how long can the kids keep up the scam before their parents get wise...not to mention the officials governing institutions of higher education? Accepted was the first feature film from screenwriter-turned-director Steve Pink.

Yorke Fryer
as S. H. Student in Hallway No. 1

Skyler Stone
as S. H. Student in Hallway No. 2

Ned Schmidtke
as Board Chairman

Mike Daily
as Stressed-out Student No. 1

Jeff Duby
as Stressed-out Student No. 2

Joseph Robinson
as A Ringer

Jaime Seibert
as A Ringer

Joseph Stiteler
as A Ringer