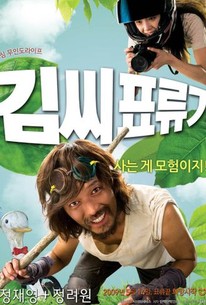 This offbeat romantic drama from South Korea witnesses the intersection of two eccentric lives. Kim is a down-and-outer who makes a suicide bid by leaping into the dark, still currents of the Han River; in lieu of dying, however, he comes to and discovers that he is lying on a strange piece of ground, covered in sand. He briefly mistakes this environment for Heaven, then learns that he passed out and drifted to an island in the middle of the river. Meanwhile, in one of the apartments alongside the river, a woman named Kim suffers from intense chronic depression and agoraphobia so severe that it has confined her to a lonely room for years. With her messy, unkempt appearance and the same dirty clothing that she has worn forever, she resembles a castaway on a desert island. As the male Kim takes up residence on the island opposite female Kim's apartment, and experiences greater contentment and peace than he has ever known before, the female Kim catches a glimpse of him through her binoculars and feels so moved by his complacency and apparent happiness that she decides to leave her apartment for the first time in ages and connect with her new neighbor.

Lee Jeong-won I
as Young Kim

Ri Min
as Man on Motorcycle

There are no critic reviews yet for Castaway on the Moon (Kimssi pyoryugi). Keep checking Rotten Tomatoes for updates!