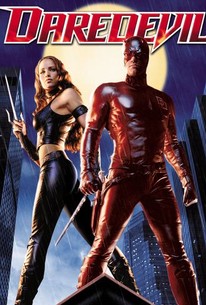 While Ben Affleck fits the role and the story is sporadically interesting, Daredevil is ultimately a dull, brooding origin story that fails to bring anything new to the genre.

One of Marvel Comics' most popular characters comes to the screen for the first time in this sci-fi action-thriller. Matthew Murdock (Ben Affleck) is a lawyer whose father, a prizefighter, was killed by gangsters when Murdock was just a boy. Since then, Murdock has devoted his life to bringing wrongdoers to justice and is willing to help others by taking on cases no other attorney will touch. Murdock is also blind, after being struck down by a truck while trying to save a man from being hit. What no one knows is that Murdock was also doused with an unusual radioactive isotope which had a strange effect on him -- while Murdock's sight may be gone, his other senses have been raised to such a keen pitch that they act like radar, allowing him to tell where he's going and what happens around him, both near and far away. Murdock puts his gifts to use at night as the costumed crime-fighter Daredevil, whose pursuit of justice has earned him the wrath of underworld leader Kingpin (Michael Clarke Duncan). Kingpin wants Daredevil out of his way once and for all, and hires Bullseye (Colin Farrell), a super-assassin with an uncanny ability to throw blades, to do the job. Daredevil also makes the acquaintance of Elektra Natchios (Jennifer Garner), a woman with super-heroic talents who is also on Kingpin's bad side, though it remains to be seen if she has aligned herself with the forces of good as Daredevil has done. Jon Favreau, Joe Pantoliano, and David Keith highlight Daredevil's supporting cast. ~ Mark Deming, Rovi

Louis Bernstein
as Judge No. 1

Levett M. Washington
as Kid No. 1

Albert Gutierrez
as Kid No. 2

Daniel B. Wing
as Quesada's Friend

Jeff Padilla
as Quesada's Friend No. 2

Jackie Reiss
as Boxing Referee No. 2

Sonya Didenko
as Quesada's Friend No. 3

Robert Iler
as Bully No. 1

Chad Christopher Tucker
as Bully No. 2

Jamie Mahoney
as Bully No. 3