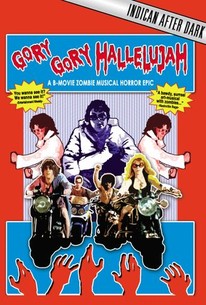 Jesus, Elvis impersonators, and the living dead all stumble their way through this campy and over-the-top independent comedy. Four bohemian actors from Seattle meet when they arrive at a theater only to find they haven't made the cut for a play for which they auditioned. On a whim, the foursome -- black nationalist Rahim (Jeff Gilbert), bisexual free-love advocate Sky (Tim Gouran), embittered feminist Jessie (Angie Louise), and geeky tumbling expert Joshua (Todd Licea) -- hop on motorcycles and set out for New York City, where they all hope to land the leading role in a production of +Jesus Christ Superstar; however, en route they pass through Jackville, a small town that has little use for free-spirited types. When the would-be Jesuses learn that Mo Jack (Joseph Franklin), a elderly local, is being run off his land so a housing development can be built, the actors leap to his defense -- which lands them all in jail in short order, and a lynching looks to be in the cards until a platoon of zombies attack Jackville. Gory Gory Hallelujah was directed by Sue Corcoran and Angie Louise, who also bill themselves as the Von Piglet Sisters.

There are no featured audience reviews for Gory Gory Hallelujah at this time.