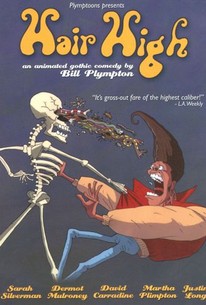 Hair High isn't first-tier Plympton, but like the rest of the animator's work, this is an assuredly odd tale that should resonate with fans of strange cinema.

As the prom draws near and the popular head cheerleader of Echo Lake High dumps her star quarterback boyfriend in favor of attending the dance with the biggest loser in school, the raging footballer plots murderous revenge in cult animation icon Bill Plympton's darkly satirical take on the teen tragedy radio hits and high-school melodramas of the 1950s and '60s. High-school sweethearts Cherri (Sarah Silverman) and Rod (Dermot Mulroney) are a match made in popularity heaven. When nerdy new student Spud (Eric Gilliland) makes the fateful mistake of offending both Cherri and Rod on his first day at Echo Lake High, his punishment is to serve as Cherri's "slave" until both she and her brutish boyfriend decree that he has made up for his unintentional transgression. Though the mere sight of Spud at first makes Cherri's skin crawl, the unlikely pair soon grow exceptionally close until, one day, love blossoms between them. Upon learning that his onetime sweetheart will now be attending the prom on the arm of the socially awkward Spud, Rod angrily forces their car off of the road on and into the icy waters of Echo Lake as the couple makes their way to the big dance. Though cunningly successful in thwarting attempts made by local authorities to locate the missing teens, Rod soon discovers that sometimes the dead have a curious way of exposing the crimes of their killers.

Matt Groening
as Will

Don Hertzfeldt
as Dill
View All

There are no featured audience reviews for Hair High at this time.