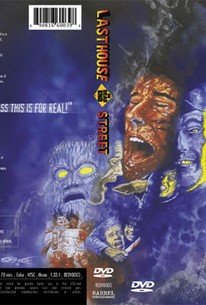 This notorious exercise in low-budget gore is poorly edited and photographed, but its catalogue of horrors and a genuinely nasty tone make it worthwhile for fans of sick cinema. Vowing revenge on the society which put him behind bars, Terry Hawkins (Steven Morrison) begins making pornographic films for a group of rich decadents, who watch them at orgies. When the jaded Steve (Alex Kregar) complains of boredom, he is kidnapped by Hawkins and his Charles Manson-like gang. The crazed killers force Steve to suck a deer's hoof which a leather-freak named Ken (Dennis Crawford) has placed in his zipper, then they show a snuff film of his friend Nancy (Barbara Amunsen) being murdered. In the film, Nancy's face is slashed repeatedly with a pen-knife, her legs are amputated with a hacksaw, and her stomach is gutted with a pair of hedge-clippers before she is cannibalized. The horrified Steve has his eye drilled out as the film ends with a voice-over stating that the murderers are now in jail. Although it is certainly repulsive, Last House on Dead End Street is not a real snuff film, as some rumors have claimed. The special effects are obviously low-rent, and not particularly convincing, but are vile enough to keep the film interesting. Among other sights awaiting brave viewers are: cows being bled to death in a slaughterhouse, a hunchback whipping a woman in blackface, a blind man being strangled, a woman branded with a hot iron before having her throat slashed, and a vicious beating. One of the more graphic examples of the Manson subgenre, this horror film is for specialized tastes only. The director of the picture is actually Roger Watkins, helming under the pseudonym Victor Janos.