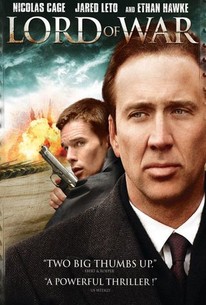 While Lord of War is an intelligent examination of the gun trade, it is too scattershot in its plotting to connect.

One man demonstrates how to get rich selling warring nations the tools of their deadly trade in this dark comedy drama. Yuri Orlov (Nicolas Cage) is an opportunistic businessman who stumbled into a gold mine after the end of the Cold War and the collapse of the Soviet Union. Huge caches of Soviet weapons became available at bargain prices (and even for free if one wasn't above stealing), and as literally billions of dollars' worth of Soviet military technology disappeared, it began finding its way into the hands of weapons dealers eager to sell it to the highest bidder. Orlov was one such dealer who found plenty of buyers for guns and military gear in unstable Third World nations, who paid cash and didn't appreciate too many questions. Orlov's exploits in the arms business quickly made him a very rich man, but they've also led to some unwanted attention from Jack Valentine (Ethan Hawke), an Interpol agent who is convinced Orlov isn't playing by the rules. Inspired by a true story, Lord of War also features Jared Leto, Ian Holm, Bridget Moynahan, and Donald Sutherland. ~ Mark Deming, Rovi

Vadim Dobrin
as Leonid
View All

News & Interviews for Lord of War

Critic Reviews for Lord of War

Audience Reviews for Lord of War