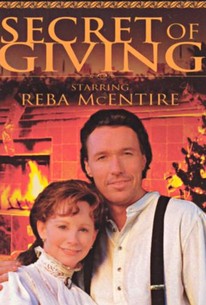 Based on Jack Curtis' novel Christmas in Calico, this sentimental TV movie is set in Oregon in the early 1900s. Reba McEntire (who also produced) stars as widowed farmer Rose Cameron, who struggles to save her home from foreclosure, and to make enough money to pay for the medicine necessary to keep her sickly son Toby (Devon Alan). Nor is Rose the only person in town weighed down by problems: a well-organized gang, clearly bankrolled by someone with a lot of political pull, has been systematically stealing cattle, threatening to bankrupt everyone in the community. Enter a mysterious man on horseback named Harry Withers (Thomas Ian Griffith), an ex-outlaw determined to atone for his past by performing random acts of goodwill throughout the west. As Withers grows closer to Rose, she begins to suspect that he is actually someone else, someone far more famous than whom he claims to be (Hint: He's been living in South America for several years, and raindrops kept fallin' on his head). In the hearty spirit of brotherhood and political correctness, the beleaguered townsfolk join forces with a group of Chinese immigrants to help Withers vanquish the villains -- and, it is intimated, to reform Villain Number One. The Secret of Giving was initially telecast by CBS on November 25, 1999.

Critic Reviews for Secret of Giving

There are no critic reviews yet for Secret of Giving. Keep checking Rotten Tomatoes for updates!

Audience Reviews for Secret of Giving

There are no featured audience reviews for Secret of Giving at this time.