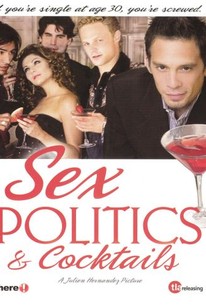 A straight man gets a life-changing eyeful when he takes a close-up look at the lives of gay men in this independent comedy. At the age of thirty, Cuban-American Sebastian Cortez (Julien Hernandez) has the feeling his life is going nowhere -- he can't get work as a filmmaker, his relationship with his Prozac-addled girlfriend has resulted in an engagement that isn't leading either of them to the altar, and in his heart he knows he's never really been in love. One day, Sebastian thinks his luck has changed when he's offered a job directing a series of documentaries, only to discover they're all about relationship issues in the gay community. Figuring he needs a crash course in the queer lifestyle, Sebastian calls on his friend Daria (Marisa Petroro), who has no small number of gay acquaintances. As Daria leads Sebastian through a series of cocktail parties with her more flamboyant gay pals, Sebastian quickly finds out more about gay culture than he ever suspected was there, but he also finds himself pondering if the reason he can't find love is he's been looking in the wrong gender. Sex, Politics & Cocktails was the first feature film from writer, director, and actor Julien Hernandez.

There are no featured audience reviews for Sex, Politics & Cocktails at this time.