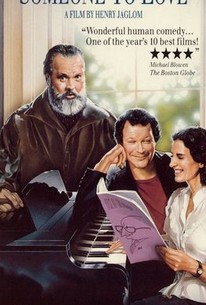 Someone to Love Ratings & Reviews Explanation

Someone to Love Photos

Orson Welles made his final screen appearance as, appropriately enough, Orson Welles (or "Danny's Friend") in Henry Jaglom's "emotional vérité" comedy Someone to Love. The film begins as filmmaker Danny (Henry Jaglom) prepares to spend the night at his girlfriend Helen (Andrea Marcovicci)'s apartment. Helen has just adjusted to sleeping alone after the breakup of her previous relationship and tells Danny that if he stays with her, she won't be able to go to sleep. Fascinated by the explanation, Danny sends out telegrams to a bunch of his Hollywood friends to meet on Valentine's Day at a Santa Monica theater, the Mayfair, that is about to be torn down to make way for a shopping mall. Danny figures that he will throw a party for his lonely celebrity friends. He also reasons that he could introduce his brother, real estate developer Mickey (Michael Emil, Jaglom's real-life brother), to some romantic companions. The party would also be a handy way to get some film footage. The day of the party, Danny's friends arrive --a famous movie star (Sally Kellerman); a pop singer named Blue (Stephen Bishop); a jazz pianist (David Frishberg); a sophisticated continental woman named Yelena (Oja Kodar); and, bringing up the rear and ensconced in the back of the theater, Danny's Friend (Orson Welles). With his camera crew in tow, Danny takes to filming his guests as they answer questions about love and loneliness.

Critic Reviews for Someone to Love

Audience Reviews for Someone to Love

There are no featured audience reviews for Someone to Love at this time.

Someone to Love Quotes