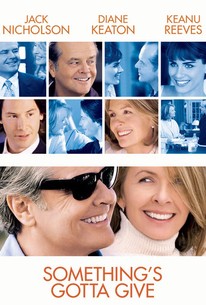 Though it occasionally stumbles into sitcom territory, Something's Gotta Give is mostly a smart, funny romantic comedy, with sharp performances from Jack Nicholson, Diane Keaton, and Keanu Reeves.

Harry Sanborn is a perennial bachelor who only dates women under the age of thirty. On what was to have been a romantic weekend with his latest infatuation, Marin, at her mother's Hamptons beach house, Harry develops chest pains. Marin's mother Erica Barry, a successful, divorced playwright, reluctantly agrees to help nurse him back to health. Once they are alone together, Harry is surprised to find himself drawn to Erica for all the right reasons. And despite her initial protestations about Harry, Erica finds herself rediscovering love. Romantic complications arise when Erica is also pursued by Harry's charming 30-something doctor, Julian Mercer. Once recovered, Harry returns home and goes back to his old ways. However, when his feelings for Erica prove to be life altering, Harry must undergo a true change of heart--if he is to win her back.

Roxanne Beckford
as Nurse
View All

News & Interviews for Something's Gotta Give

Critical Consensus: "Because" Is Less Than So-So; "Messengers" Not Screened — Guess The Tomatometer!
Box Office Guru Preview: Mel, Cameron, & Leo Battle For #1 Spot
Anne Hathaway to Get "Knocked Up" for Judd Apatow
View All

Critic Reviews for Something's Gotta Give

Audience Reviews for Something's Gotta Give