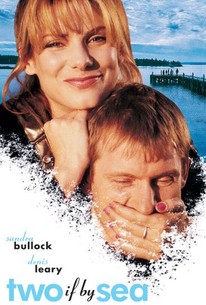 Two if by Sea

Co-star Denis Leary co-wrote the script for this romantic comedy-drama. Leary plays Frank O'Brien, a no-class, small-time hood who is the boyfriend of Roz (Sandra Bullock), a cashier with a New York Jewish background who dreams of settling down and having kids. Roz wants out of the relationship but is fearful to break up. On a Friday, she accompanies Frank as he steals a painting. He tells her that it's his last job as a thief. Frank plans the delivery for Sunday evening so that they can turn the job into a getaway weekend. They go to a New England town and break into a huge home; the owners are on vacation. A sophisticated neighbor, Evan Marsh (Stephen Dillane), believes that they are friends of the owners' children and invites them to a party. Evan is an upper-class bachelor and is attracted to Roz. Roz goes horseback riding and boating with him, pretending a sophistication she doesn't possess, while Frank fumes at the rich rival. Meanwhile, Frank's crime boss Beano (Wayne Robson) learns that the painting Frank has stolen is a four-million-dollar Matisse and comes to the town with three henchmen. They are pursued by Detective O'Malley (Yaphet Kotto), who is trying to find a mysterious master art thief.

Kay Hawtry
as Lady with dog

Philip Williams
as Man with Phones

Kay Hawtrey
as Lady with Dog

Claire Rankin
as Reporter No. 1

Michael Risley
as Reporter No. 2

Dennis O'Connor
as Cop on Scene

Joseph Di Mambro
as Cop No. 1

Tracy Jones
as Cop No. 2

Gary Vermeir
as Buyer
View All

Critic Reviews for Two if by Sea

Audience Reviews for Two if by Sea

Two if by Sea Quotes