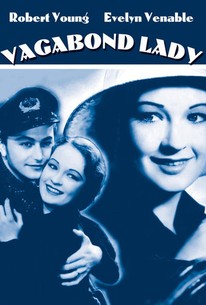 Anxious to graduate from 2-reel comedies to feature films, producer Hal Roach began phasing out his short-subject manifest in 1935. Up until that year, his only talkie features had starred Stan Laurel and Oliver Hardy, so Vagabond Lady can be seen as the vanguard in Roach's new policy of turning out "sophisticated" pictures a la Sam Goldwyn. Evelyn Venable delivers a remarkably good comic performance as Josephine Spriggins, daughter of "Spriggs" Spriggins (Frank Craven), faithful janitor for the department-store firm of R. D. Spear & Company. Prodigal son Tony Spear (Robert Young) falls in love with Josephine and proposes marriage, but his stuffy older brother John (Reginald Denny) vows to save Tony from making so disastrous a social gaffe by marrying the girl himself. The disgruntled Tony retreats to his yacht, where he finds himself saddled with a reluctant passenger -- Josephine. The two spend the rest of the picture getting on each other's nerves, until at the very last moment they realize they're still madly in love after all. Clearly inspired by It Happened One Night (the twist being that the girl is poor and the boy is rich), Vagabond Lady is a minor but agreeable entry in the screwball-comedy genre. The only clue as to the identity of its producer is the film's utilization of stock Hal Roach background-music themes during a nightclub sequence.

Noah Young
as Man in Man-Hole

Ivan Linow
as Man in Man-Hole

Gwen Zetter
as Maid of Honor

John Elliott
as Master of Ceremonies

There are no critic reviews yet for Vagabond Lady. Keep checking Rotten Tomatoes for updates!

There are no featured audience reviews for Vagabond Lady at this time.