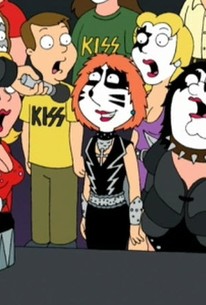 In this follow-up to the "Road to Rhode Island" episode, Peter (voice of Seth MacFarlane) sees a commercial for "Kiss-Stock" while watching "Kiss Forum" on Rhode Island Public Access. He decides that since he and Lois (voice of Alex Borstein) have always been huge fans of the group, they'll go to the festival, leaving Brian (MacFarlane) to look after Stewie (MacFarlane). Stewie, who has grown obsessed with the BBC children's program, "Jolly Farm Revue," immediately runs away from home. He's decided to take up residence at Jolly Farm. He sneaks onto a plane with a British family, and as Brian arrives to bring him back home, the plane takes off. To make matters worse, Stewie has gotten on the wrong plane, and the pair end up in the Middle East. Stuck with no money and no way home, Stewie and Brian perform a musical number to distract a merchant so they can steal a camel. They also steal a hot air balloon, have an encounter with the Pope, and visit a hash bar in Amsterdam before Stewie reaches Jolly Farm, which is not everything he dreamt of. Meanwhile, at "Kiss-Stock," Lois brings shame upon Peter when he learns that she doesn't know the words to "Rock & Roll All Nite." This episode features the voices of Andy Dick, Jon Favreau, Lauren Graham, Michael McKean, Fred Willard, and Gene Simmons and Paul Stanley of KISS.

Ace Frehley
as Himself

Peter Criss
as Himself

Gene Simmons
as Himself

Paul Stanley (II)
as Himself

Andy Dick
as Himself 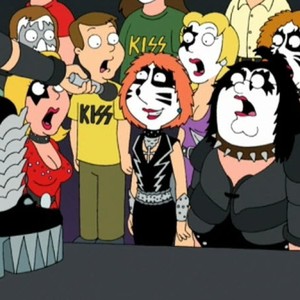