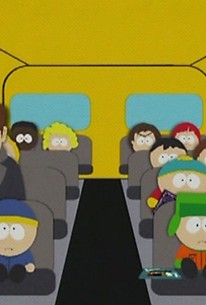 A pointed satire about the 2000 presidential election shares time with a parody of The Terminator in this typically irreverent episode of South Park. After Eric's snazzy Trapper Keeper makes him the coolest kid in class, the kids meet a robot from the future that was sent to destroy the Trapper Keeper. If he fails, robots will eliminate humans in a war. Mr. Garrison, now teaching kindergarten, holds a class election that quickly spins out of control after one student is unable to commit to a candidate. That student's name -- Florida. "Trapper Keeper" is highlighted by parodies of 2001 and Akira, and debuted November 15, 2000, on Comedy Central.