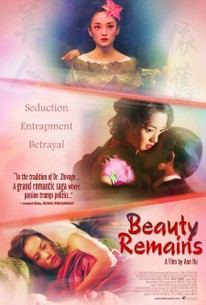 A woman's tainted family history proves to be both a blessing and a curse in this drama from Chinese-American filmmaker Ann Hu. Fei (Zhou Xun) is a young woman who was born as a result of an extra-marital dalliance by her father, the wealthy Master Li. When Master Li dies while Fei is away at school, she returns home to pay her respects. At the reading of his will, Fei learns that Li's final wishes have specified she must continue her education at the same school as Ying (Vivian Wu), her half-sister, and that the two girls must share a home. Fei is not happy with this new arrangement; Ying makes no secret of her dislike of Fei, while many of Fei's new classmates regard her as a nuevo riche who has rejected her proletarian roots. Fei meets Huang (Wang Zhiwen), Ying's rich but rebellious boyfriend, and finds herself becoming deeply infatuated with him; Ying, aware of her half-sister's feelings, insists that Huang set a date and marry her as soon as possible to bring their budding romance to an end. Mei Ren Yi Jiu (aka Beauty Remains) received its North American premiere at the 2005 Los Angeles Film Festival.

There are no featured audience reviews for The Beauty Remains (Mei ren yi jiu) at this time.