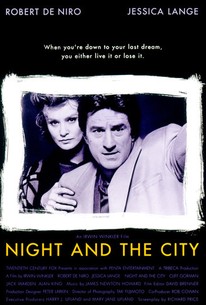 Night and the City

Night and the City Photos

Night and the City is a remake of the 1950 Richard Widmark vehicle of the same name. Major changes: As played by Robert DeNiro, the Widmark character, one Harry Fabian, is no longer merely a two-bit tout but instead a two-bit lawyer; and the film is set in New York, as opposed to the London setting of the original. While embroiled in a lawsuit involving a boxer, Fabian becomes fascinated in the world of championship prizefights. Always susceptible to get-rich-quick schemes, Fabian tries to organize his own big boxing event, but to do that he needs the help of hardnosed promoter Alan King--and to get to King, Fabian uses the promoter's father, former boxer Jack Warden, to act as front man. Fabian scurries around lying and double-dealing in order to sell percentages of the upcoming bout, while King warns Fabian of the consequences should anything unfortunate happen to the ailing Warden. Disaster plagues Fabian as his boxers fail to pass their physicals, and Warden dies while setting up the big event. Pursued by King and his creditors, the terrified Fabian is urged by girlfriend Jessica Lange to get of town. Instead, Fabian decides to face up to his failings for the first time in his life, and stands his ground for the final, fatal confrontation. Like the earlier Widmark film, the 1992 Night and the City is based on a novel by Gerald Kersh.

Joy Philbin
as Herself

Kennan Scott
as Kid on Phone

Kenn Scott
as Kid on Phone

Mitch Cunningham
as Kid at Disco

Catherine Russell
as Singer
View All

Critic Reviews for Night and the City

Audience Reviews for Night and the City

Night and the City Quotes