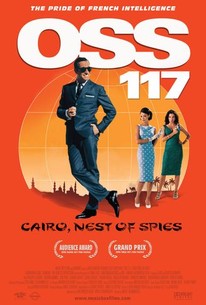 This clever spy spoof plays politics and movie conventions for laughs and features a great turn by Jen Dujardin as a smarmy-suave nouveau-Bond.

OSS 117: Cairo -- Nest of Spies constitutes the eighth installment in a long-running series of movies about OSS 117 (the government code name for Hubert Bonisseur de la Bath) -- a French super-spy and European equivalent of James Bond. The creation of author Jean Bruce, OSS eventually starred in over 265 novels and seven cinematizations through 1970. The first seven film outings were sober and straight-faced; the eighth go-round (the first after a 38-year lapse) does a 180 to shamelessly poke fun of the rules established by the genre. A glib yet intelligent spoof, it joins the ranks of Our Man Flint (1965), Aghaye Hallou (1970), Mad Mission 3: Our Man from Bond Street (1984), and other international pictures that glibly satirize the subgenre made infamous to Americans by Bond; like Mad Mission 3, it even packs in an OSS 117 (Jean Dujardin) with a startling resemblance to Sean Connery. The film's comic conceit involves making OSS 117 arrogant, conceited, culturally insensitive, chauvinistic, and thoroughly moronic (he pretends that various cultural institutions and religious practices, for instance, are nonexistent if he is unfamiliar with them); yet the character somehow manages to slide through outrageously dangerous situations unscathed, time and again. The teaser prologue finds OSS 117 in Berlin, where he outwits the Nazis by stealing vital documents from them, hijacks an Axis plane in mid-nosedive, and saves himself and the craft at the last yawning moment. Ten years later, he journeys from Rome to Cairo, where he investigates the death of a fellow agent, posing as the proprietor of a chicken farm. His "side" activities during this jaunt involve hammering out a peace arrangement for the Middle East, keeping tabs on the Suez Canal, and monitoring the Russians. Jean-François Halin scripted the film, maintaining an utterly deadpan tone throughout; Michel Hazanavicius directed.

Claude Brosset
as The Boss

Youssef Hamid
as The Imam

Khalid Maadour
as The Follower

Bernard Nissille
as Man at the Airport