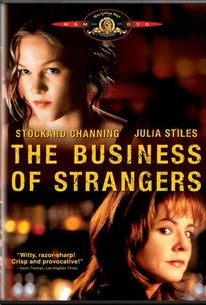 The Business of Strangers

The Business of Strangers showcases a complex, compelling performance by Channing. Her interactions and clashes with Stiles make for riveting viewing.

The Business of Strangers Photos

Two women on different ends of the spectrum of corporate power come together with explosive results in this drama. Julie Styron (Stockard Channing) is a successful executive with a major international corporation who is starting to feel the pressure of her position; she has few friends and no family to buffer her from the responsibilities of her work, and she suspects that the company's CEO is thinking about replacing her. Trying to get one step ahead, she meets with the slightly manipulative headhunter Nick Harris (Frederick Weller). Julie's anxieties come to a head when she has to give a major out-of-town presentation without the help of her assistant Paula Murphy (Julia Stiles), who failed to show up on time. Furious, Julie gives Paula a severe dressing down before firing her, but then Julie is called into a meeting with Nick in which she gets some unexpected news -- she's going to be taking over his job. Eager to celebrate, Julie runs into Paula, and tries to apologize for their earlier encounter by offering her a hotel room for the night and a few drinks. In time, Nick also turns up at the hotel and the women - upon running into him - realize that he is a mutual acquaintance. Later, Paula shares a secret with Julie -- Nick raped one of her friends while they were in college, and since then Paula has pondered taking revenge against him. Julie is eventually drawn into Paula's plan when they encounter Nick later that evening. But there may be more to Paula than meets the eye. The Business of Strangers was the first feature from writer and director Patrick Stettner; the film was shown in competition at the 2001 Sundance Film Festival.

Salem Ludwig
as Man At Pool

Critic Reviews for The Business of Strangers

Audience Reviews for The Business of Strangers

The Business of Strangers Quotes