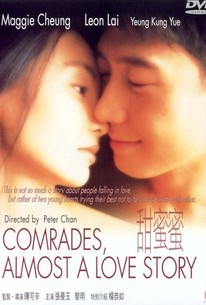 Destiny brings two people together, but they aren't sure if they're meant to be friends or lovers in this romantic comedy-drama. In 1986, Xiaojun (Leon Lai) arrives in Hong Kong from mainland China, full of dreams about life in the big city and determined to make enough money to send for his fiancée and marry her. Xiaojun knows no one in Hong Kong except his aunt, but with her help, he finds a room in a cheap hotel and picks up a job peddling a delivery bicycle for a butcher. On his day off, Xiaojun decides to get lunch at a McDonalds, which he's heard about but never seen. Xiaojun is waited on by Chiao (Maggie Cheung), a pretty girl who has also moved to Hong Kong from the mainland to seek her fortune. Chiao is taken with Xiaojun, but thinks he's too much the country bumpkin, especially since he can't speak Cantonese or English. Chiao arranges for Xiaojun to get lessons in English and teaches him about life in Hong Kong and how to get rich quick; she also ropes him into helping with her latest business scheme, using his delivery bike to sell flowers. Xiaojun and Chiao become best friends -- indeed, each is the only real friend the other has in Hong Kong -- and one night, on New Year's Eve, the two find themselves alone together and end up making love. The next morning, both Xiaojun and Chiao are certain they've made a mistake; Xiaojun goes on to marry his sweetheart from home, while Chiao opens a flower shop and becomes involved with a kind man who has ties to organized crime. As the years pass, however, Xiaojun becomes convinced that his mistake wasn't sleeping with Chiao, but letting her go, and eventually he decides he must find her and win her heart. Comrades: Almost a Love Story was a runaway success in Hong Kong, where the film won nine trophies at the 1997 Hong Kong Film Awards, including Best Picture, Best Director, Best Screenplay, and Best Actress.