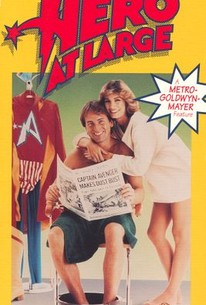 John Ritter plays an unsuccessful actor who takes a job posing as comic-book hero Captain Avenger at comics stores and conventions. While thus garbed, Ritter foils a grocery store robbery. He skedaddles from the scene when the cops show up, leading witnesses to assume that he is a genuine costumed superhero, the sort that shows up to foil the villains and then modestly retreats after his job is done. Ritter is hired by the mayor's staff, who hope that the Captain Avenger tie-in will help the mayor win an upcoming election. This plan comes acropper, and Captain Avenger finds himself on the outs with the public. Prodded by his girlfriend Anne Archer to be himself and not rely on a costume and mask to gain adulation, Ritter becomes a bonafide hero when he rescues several citizens from a fire. Thanks to the enthusiastic performance of John Ritter, Hero at Large remains amusing even when you know what's going to happen next (a common occurrence in this film).

Gerry Black
as Heroes at Fire

Gerald Castillo
as Heroes at Fire

Joyce Brothers
as Herself

Natalie Cilona
as Woman in Fire

Vanda Barra
as Woman in Crowd

David-James Carroll
as Actor on Bus

Rita Crafts
as Woman in Crowd

Kenneth Cory
as Man at Rally

Peter Iacangelo
as Man at Rally
View All

Critic Reviews for Hero at Large

Audience Reviews for Hero at Large