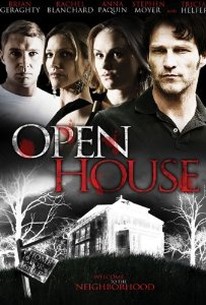 A woman trying to move on with her life is thrown into a potentially deadly situation in this independent thriller. Alice (Rachel Blanchard) has just broken up with her husband and has decided to sell the house they shared. Alice has been showing her home to prospective buyers when a strange couple sneaks into the house, David (Brian Geraghty) and Lila (Tricia Helfer). David and Lila are psychotic murderers who promptly kill a friend who was visiting Alice; Lila orders David to murder Alice as well, but for some reason he hesitates and instead locks her in a crawlspace in the basement. Over the next several days, David and Lily engage in kinky sex and pretend to live a life of bourgeois domesticity while slaughtering anyone who makes the mistake of stopping by the house; Alice, meanwhile, hears what's happening from her hiding place and begins to understand the strange bond between her captors and David's interest in her. Open House was the first feature film from director Andrew Paquin; his sister, Anna Paquin, appears in a supporting role, as does her True Blood co-star Stephen Moyer.

Cary Alexander
as Alex
View All