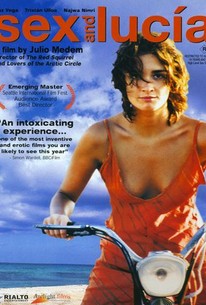 Beneath the gratuitous nudity lies a complex and visually striking movie.

Lucia is a waitress who lives and works in Madrid. After what she believes to be the loss of her boyfriend, the tortured writer Lorenzo, she flees to a secluded island that he had often told her about. There she meets Carlos and Elena, who have also run away to the island to escape personal tragedy. Unbeknownst to them, all three have a connection to Lorenzo. Elena met him many years ago on that same island and enjoyed beautiful, anonymous lovemaking with him in the sea by the light of a full moon. 9 months later, Elena gave birth to Luna, but never managed to find Lorenzo. Carlos was the stepfather of Belen, who disappeared after she unwittingly caused the death of Luna. As she hears more about the past of her two new housemates, Lucia is reminded of the book Lorenzo was writing, a tale about a journey into a dark, deep past that brought on his depression. Soon, the lines between fact and fiction begin to fall apart.

Javier Corominas
as Vendor in Refreshments Kiosk
View All

Critic Reviews for Sex and Lucia

Audience Reviews for Sex and Lucia