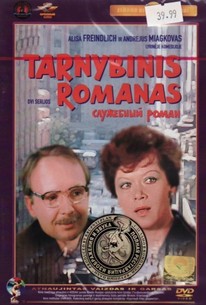 Sluzhebny Roman won the State Prize of the Russian Federation in 1979 and was well-received by Russian audiences. One of the most popular films by director Eldar Ryazanov, it had no overt political content and was simply a funny romantic comedy. Andrei Myagkov plays a clerk, a widower with two children; Alisa Freindlikh plays his boss, a woman so committed to her career that she spares no time for her appearance. Her manner irritates the clerk so much that he makes a bet with his office-mates that he can awaken the woman in her. He begins, therefore, to court her. She is decidedly dowdy and mannish, and the advances of her clerk catch her by surprise. She seeks advice from her best friend about how to proceed. Based on his bantering manner with her, her friend advises her to invite him to dinner. Even at dinner, she can't soften her brusque office manner, and a fight breaks out. Nonetheless, love eventually wins the day. ~ Clarke Fountain, Rovi

There are no critic reviews yet for Sluzhebnyy roman (Office Romance). Keep checking Rotten Tomatoes for updates!

There are no featured audience reviews for Sluzhebnyy roman (Office Romance) at this time.