So Dear to My Heart 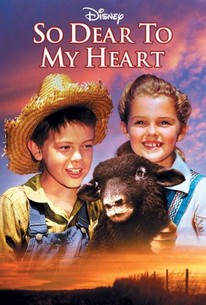 So Dear to My Heart

So Dear to My Heart Ratings & Reviews Explanation

So Dear to My Heart Photos

Like Disney's earlier Song of the South, So Dear to My Heart peppers its live action with animated sequences. In this film, however, it is the "live" story that lingers longest in the memory. Set in 1903, the film takes place on the small Kincaid farm. Twin sheep are born in the barn: one white, one black. When the mother sheep rejects the black lamb, young Jeremiah Kincaid (Bobby Driscoll) adopts the animal, naming it Danny, after the great trotting horse Dan Patch. Danny grows up to be quite troublesome, and Jeremiah's grandmother (Beulah Bondi) wishes that the boy would get rid of his pet. Jeremiah's only ally is kindly blacksmith Uncle Hiram (Burl Ives), who encourages the boy to enter Danny in blue-ribbon competition at the county fair. Granny is against this notion, so Jeremiah sets about to pay his own way. On a stormy night, Danny runs away; Jeremiah is kept from searching for the lost sheep by Granny, who now believes that the boy wants to enter the state fair contest for selfish reasons rather than out of love for his pet. She further warns that the Lord may not let Danny survive the night. The next day, however, Danny returns. Remembering Granny's remonstrations, Jeremiah now states that he won't attend the county fair, having promised the Lord that he'd forget about the competition if Danny was spared. Moved by this unselfishness, Granny softens her own stance, claiming that she'd promised the Lord that Jeremiah could go to the fair if the lamb returned alive. The story reaches a warm-hearted climax at the fair; Danny doesn't win, but his ultimate prize is far more meaningful than any blue ribbon. The isolated animated sequences spring from Jeremiah's scrapbook, illustrating such homespun philosophies as "stick-to-it-tivity" and "it's whatcha do with whatcha got." So Dear to My Heart yielded a hit song, "Lavender Blue," which co-star Burl Ives retained in his repertoire until his dying day.

Spelman B. Collins
as Judge

Critic Reviews for So Dear to My Heart

Audience Reviews for So Dear to My Heart

So Dear to My Heart Quotes