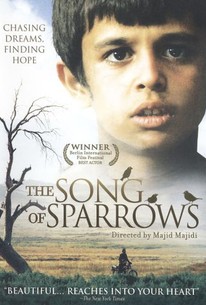 A heartfelt, affecting parable, The Song of Sparrows is another gem from Iranian director Majid Majidi.

Fired from his job on an ostrich farm after one of the birds runs away and he is blamed for the loss, a man becomes so obsessed with collecting useless rubbish that he begins to neglect his wife and daughter while becoming completely oblivious to their familial hardships. Karim earned a decent living by working on the ostrich farm, so after he is fired he sets out on a futile attempt to locate the bird. One day, as Karim heads into town in order to have his daughter's hearing aid repaired, he offers a lift to a wandering man and decides that there is good money in the taxi business. But as his connection to the people of the city grows stronger, his personality begins to transform. Every day, Karim returns home with a new haul of useless junk, giving his picturesque courtyard the appearance of a sprawling junkyard. When his wife offers a spare door from the courtyard to a neighbor in need, Karim completely looses his cool and sets out to retrieve the door. When Karim stumbles and breaks his foot while rummaging through his second-hand goods, the kindness of neighbors makes him realize that his priorities have taken a turn for the worse.

Critics Consensus: Fast & Furious Is Running On Empty
View All