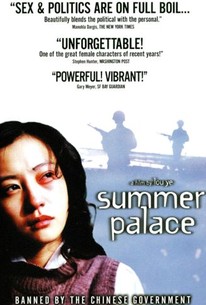 Though it suffers from excessive length and inconsistent pacing, Summer Palace is held aloft by Hao Lei's riveting performance.

A romance takes place against some of the most turbulent events in recent Chinese history in this epic-scale story from filmmaker Lou Ye. Yu Hong (Hao Lei) is a beautiful 17-year-old girl who is soon to leave the small border town where she was born and raised to attend college at Beijing University. Shortly before Yu Hong leaves for school, she gives her virginity to her longtime boyfriend, Xiao, and pledges to remain faithful to him. At Beijing University, Yu Hong makes friends with Li Ti (Hu Ling), another girl dealing with a long-distance relationship, and meets Zhou Wei (Guo Xiaodong), a handsome student who soon steals her heart. Yu Hong leaves her relationship with Xiao behind to commit herself to Zhou Wei, and she's swept up by her feelings for him as they embrace the new social and economic freedoms which are being felt on campus. The empowerment felt by the students in Beijing comes to a head during a series of demonstrations in Tiananmen Square; the protests have tragic consequences, and the excitement of new possibilities gives way to a feeling of defeat. Yu Hong and Zhou Wei are separated and the heavy hand of the state is brought to bear on the rebellious students. The first Chinese film to feature full-frontal male and female nudity, Yiheyuan (aka Summer Palace) received its world premiere as an official selection at the 2006 Cannes Film Festival.

RT on DVD: Call It, Friend-O — No Country For Old Men Hits DVD
Critics’ Consensus: Cloverfield is Monstrously Fun, 27 Dresses Fails to Impress, Mad Money Not Worth Much
TORONTO: Reviews of "Borat," "Paris, Je T’aime," And More
View All