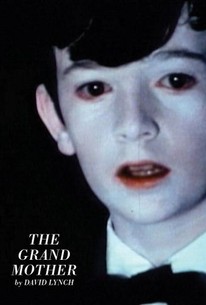 A half-hour experimental film from early in director David Lynch's career, The Grandmother anticipates his later Eraserhead in its depiction of family life as a surrealistic nightmare. The film begins with the appearance of the mother and father, who sprout from the ground-like strange plants and speak only in dog-like animal sounds. They are soon joined by another sprout, a pale, silent young boy dressed in a tuxedo. The scene moves to the family home, where the gruff, boorish parents intimidate and abuse the boy, cruelly punishing him for his chronic bed-wetting. Eventually, the boy escapes to an upstairs room where he dumps dirt on a bed and plants a large seed. This seed grows into a monstrous plant, which gives birth to an older woman, the grandmother. She and the boy form a loving bond, protecting him from the harshness of his parents. However, when the grandmother falls ill, the boy's world threatens to collapse. Lynch mingles live-action footage with animated interludes and replaces traditional dialogue with an unsettling soundtrack. The film is less concerned with narrative than with using its horrific and sometimes beautiful imagery to evoke the intense emotions of a tormented child.

Critic Reviews for The Grandmother

Audience Reviews for The Grandmother