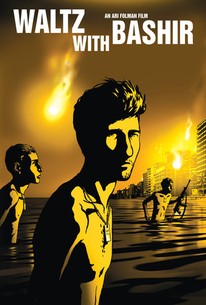 A wholly innovative, original, and vital history lesson, with pioneering animation, Waltz With Bashir delivers its message about the Middle East in a mesmerizing fashion.

Director Ari Folman's animated, quasi-documentary Waltz With Bashir follows the filmmaker's emotional attempt to decipher the horrors that unfolded one night in September of 1982, when Christian militia members massacred more than 3,000 Palestinian refugees in the heart of Beirut as Israeli soldiers surrounded the area. Folman was one of those soldiers, but nearly 20 years after the fact, his memories of that night remain particularly hazy. After hearing an old friend recall a vivid nightmare in which he is pursued by 26 ferocious dogs, Folman and his friend conclude that the dream must somehow relate to that fateful mission during the first Lebanon War. When Folman realizes that his recollections regarding that period in his life seem to have somehow been wiped clean, he travels the world to interview old friends and fellow soldiers from the war. Later, as Folman's memory begins to emerge in a series of surreal images, he begins to uncover a truth about himself that will haunt him for the rest of his days. ~ Jason Buchanan, Rovi

Ari Folman
as an Israeli

Ron Ben-Yishai
as an Israeli

Ori Sivan
as an Israeli
View All

News & Interviews for Waltz with Bashir

Critic Reviews for Waltz with Bashir

Audience Reviews for Waltz with Bashir