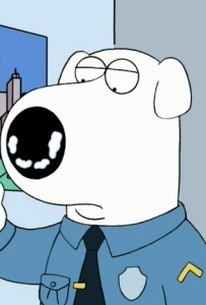 Season Three of Family Guy begins with the opening episode of a two-party story as Brian, the Griffin family's talking, martini-imbibing dog, makes a concerted effort to overcome his selfishness. Before long, he is working as both a seeing-eye dog, and as a drug-sniffing pooch for the police. Unfortunately, Brian's addictive personality gets the better of him when he comes across a cache of cocaine. This lands the Griffen family's dog in rehab, where he is told that his master Peter is a bad influence. Thus does Brian secretly sneak off for a long, long trip, far, far away from Quahog. Listen for the voice of June Foray in a quickie "Rocky and Bullwinkle" reference, not to mention a cameo appearance from "Froot Loops" spokesbird Toucan Sam!