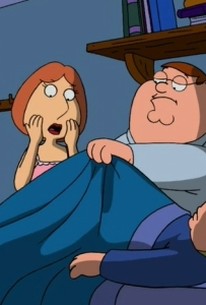 And the Wiener Is...
Family Guy Season 3

Peter becomes overly competitive with Chris when he discovers that his son possesses a bigger penis than he does. This leads to Peter forcing Chris to join a gun club and participate in a hunting trip, with amazing results. (Guns, hmmm? Calling Dr. Freud).Meanwhile, daughter Meg has problems of her own when she tries out for the cheerleaders squad and ends up a "flag girl"--and her troubles don't end just because the band performs "Electric Avenue" (or something like it). As for the cultural reference, this week's episode serves up side glances at Elton John, Ally McBeal, Rooster Cogburn and comic-strip character Andy Capp.

Rachael MacFarlane
Girl 2 in Commercial / Girl Jumping From the Tree